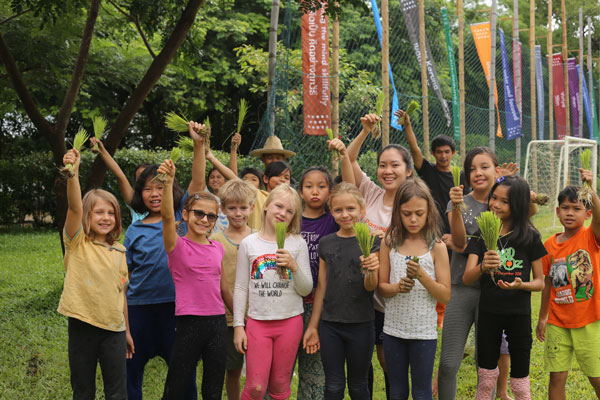 We humans have long used language to communicate our thoughts and feelings to others, to connect with one another, and ultimately to identify with our culture and better understand the world around us.

Being multilingual will enable your children to experience life through the eyes of others and to interpret the way in which people from different backgrounds and beginnings perceive, interpret, and experience life.

You can think of speaking a second language as being handed a VIP pass to an aspect of life that many people would never otherwise be able to experience. That’s the abstract. Understandably, you’ll want some facts to back that up.

In this article, we are going to explore the benefits of a multilingual education, and how it can shape and influence your children’s future.

What are the benefits of a multilingual education for the brain?

There is more than one way in which a multilingual education can benefit your child. Let’s start with what it does to the brain itself:

We’ve all heard the comparison between children’s brains and sponges, in that in the early years of their development, they soak up information like water through a sponge. This is absolutely correct. Thus, not only will your children likely be able to learn and excel with a new language much easier, but they will also be challenging and expanding their overall cognitive development as well.

It is no secret that children who speak a second language perform much better in tasks that call for creative thinking, problem solving, and indeed, pattern recognition. After all, one of the most crucial stages in learning a second language, is when one begins to pick up on various patterns in the way in which foreign words are joined together to form sentences. This is the very exciting and rewarding ‘breakthrough’ moment in which those learning a new language progress from making simple statements, to being able to hold entire conversations.

Young learners that pick up a second language not only develop greater linguistic awareness, but they will also gain a much more complex understanding of their native language.

In bilingual students, their brain functions are improved significantly as their minds are challenged to recognise and interpret meaning when communicating in multiple languages. This translates wonderfully into their academic studies.

In one comprehensive thirty-two-year study carried out by Thomas and Collier from the George Mason University, it indicated that students who had a multilingual education and spoke several languages, ultimately showed greater achievements in math, vocabulary, and reading when compared to their monolingual peers (students who only speak the one language).

Another great benefit to having multilingual education is the way in which it influences memory. Children who learn a second and third language have much better memory, and are far more cognitively creative than their single language peers.

Further research indicates that individuals who are bilingual tend to be much more efficient when remembering names, directions, and other items than those who only possess the one language.

This is a great bonus for you as a parent. You see, if ever your multilingual child tries to tell you that “they forgot to do their chores”, you know that there’s a good chance they’re telling you porkies.

When referring to your child, the prospect of them developing dementia later in life should be the last thing on your mind. However, that doesn’t change the fact that bilingual brains are much more resistant to dementia, which is yet another amazing benefit of a multilingual education.

A fairly recent study indicates that those who speak more than one language, develop dementia on an average of five years later, and have a much easier time of combating brain dysfunction as they progress through the twilight years of their life.

This brings even greater depth and meaning to the argument that a multilingual education is an investment in your children’s future.

And whilst we’re on the subject of their future, let’s look at how a multilingual education can benefit your children later in life…

How can a multilingual education positively influence your children’s future?

Having a multilingual education comes with a great many benefits. Some of the most exciting of which, are those that come much later in life. Let’s take a look at how speaking another language can give your children an advantage over others later in life.

In our ever-changing, interconnected world, there is always going to be an increased need for a multilingual workforce. And though having the ability to conduct business in multiple languages is not necessarily crucial for a successful life, it will certainly go great lengths toward securing your children better career opportunities.

The fact is, bilingual people tend to hold higher positions and earn bigger incomes than their monolingual peers in the same industry.

For example: as an employer, if you are looking at two very similar resumes, but one of the candidates speaks one or more languages, the likelihood is that you will be far more interested in seeing what the multilingual candidate can bring to the table.

By that, we are referring to the command system in the brain that directs the attention processes we utilise for solving problems, planning, and performing mentally demanding tasks. Those who are bilingual are much more efficient when sorting the relevant information from the irrelevant. In other words, they are typically better able to focus, and tend to be much more effective decision-makers and thinkers.

This will give your children a huge advantage later in life when pursuing their goals—no matter what direction they decide to take.

Just as travel broadens the mind, being exposed to multiple languages can assist children in developing a deeper appreciation for various other cultures. Students who are encouraged and able to engage with other languages, songs, idioms, and folk tales (without requiring translation), lead to much more meaningful cultural exchanges.

That’s a fancy way of saying that multilingual people tend to be more empathetic. In addition to that, speaking a second language can give your children an increased sense of belonging. When you understand and appreciate another language, it gives you a sense of ownership over other cultures. So, even though they may never be permanent citizens of a certain country or ethnicity, it can certainly make them feel as though they are ‘honourary members’.

4 – Improved relationships (both romantic and otherwise)

Whilst we are on the subject of empathy, being able to speak and understand another language augments your children with multiple perspectives and a greater sense of understanding. This increased empathy can help tremendously toward helping them form stronger, deeper, and more generous mutual relationships.

That isn’t to say that monolingual couples can’t form strong and meaningful relationships. It simply means that as an individual, having learned to experience the world through multiple languages, and dream dreams in other tongues, they can tend to have an easier time of being able to appreciate and understand other people’s perspectives.

All in all, a multilingual education will provide your children with the opportunity to expand their monolingual perspective and engage with a whole new aspect of life.

We hope that you have found this article helpful, and that you give this some careful consideration.

If you have any further questions for us, whether it be about the curriculum that we teach, or the general cultural environment that we provide as an educational institution, please do not hesitate to contact us at your convenience.

In any case, we wish you all the best. Thanks for stopping by!