Live and Learn
Focus on Talent and Hard Work

My friend Pierre was a chubby kid. He was not good at sports.
In fact, his high school PE teacher told him he didn’t have to attend classes.
It was a waste of time. When he turned 25, inspired by a beautiful and fit neighbour, he started jogging.
Just over a year later, he entered his first triathlon and came second… to last. He didn’t give up.
Pierre went on to become Ironman World Champion 3 times, establishing a new record in 2005.
What happened to the chubby high school kid?
Chick here to read more

Mario was forced to take English as a second language for 5 years of high school.
He still couldn’t hold a conversation in that language.
He thought he was not gifted for languages. Inspired by South American friends,
he started learning Spanish and was fluent in less than two years.
Surprised, he thought he would try another language. Two more years and he could speak
German well enough to read novels in that language.
He’s now learning Thai. What happened to the guy who was hopeless at learning languages?

Both Pierre and Mario are living examples that talent is not enough.
Research seems to agree now that some talent, maybe up to 50%, could be genetic.
This leaves a whole 50% of anyone’s success based on the education and training one receives.
How does it work?

“Studies by Professor K. Anders Ericsson of Florida State University found that
although all the violinists spent a similar number of hours practicing,
the most accomplished among them were more purposeful: The most expert performers would ensure
that a teacher regularly listened to and critiqued their playing thus providing a feedback mechanism.
They also asked their teachers to assign practice exercises they weren’t yet proficient at
and worked on them until they became competent. In this way, they always had clear goals to work toward.”
The Creative Curve (2018), Allan Gannet

The most important point is this quote is probably the fact that
performers were asking for feedback and extra practice
as opposed to being forced to put in extra practice time when they didn’t want to.

From a Buddhist perspective, we can connect these ideas to the “right intention and “right action”.
As Phra Ajahn Jayasaro once explained to teachers, it’s not enough to practice, we need to practice the right way.
This includes regular practice time, right intention towards a difficult but achievable,
relevant and meaningful goal that it will boost self-confidence.
The “intention” must be ours! We all need to be involved in setting goals before
they become meaningful and relevant.

From a neuroplasticity point of view, we now know that the brain doesn’t stop growing.
No matter how old we are, we can still all get smarter!
Based on this discovery, Carol Dweck has coined the now famous expression “growth mindset”,
the belief that abilities can be developed,
as opposed to a “fixed mindset” in which innate aptitude limits the ability to learn.

A growth mindset encourages us to train ourselves to think “I can’t…yet.”
Instead of “I can’t”. Part of a growth mindset is being willing to learn how best to learn.
Parents may be familiar with the growth mindset, but they may be using it toward the goal
of the next test grade or school application.

“That’s not what it is.
It’s about learning and improving and loving the process.
Those other things come about as a byproduct.”

Click here to read more: Nice Try is Not Enough

We Can All Get Smarter!

Raw talent might give a head start but hard work is the key.
Consider the guidelines below to optimise kids’ development: 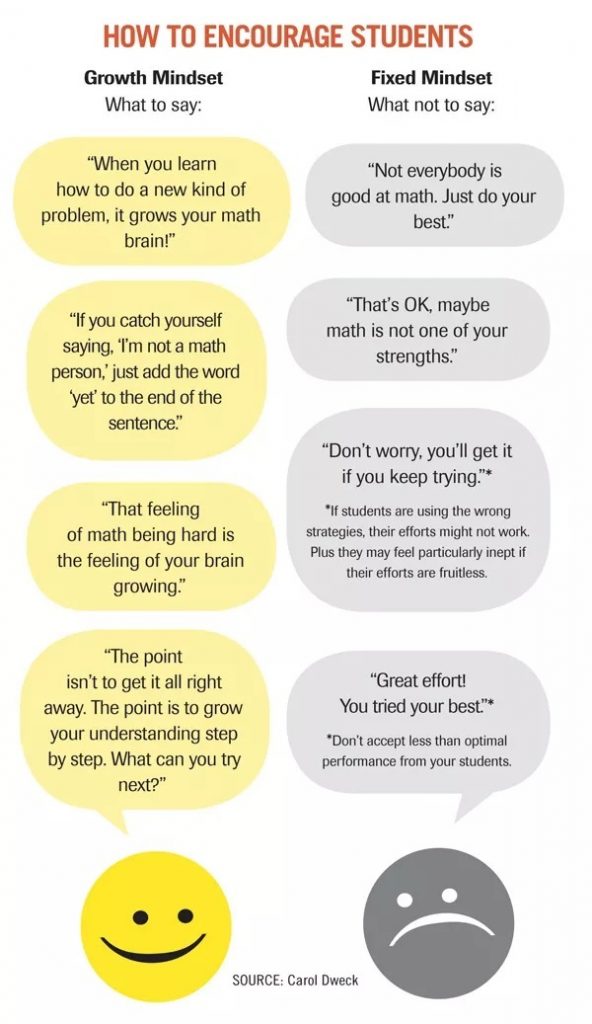